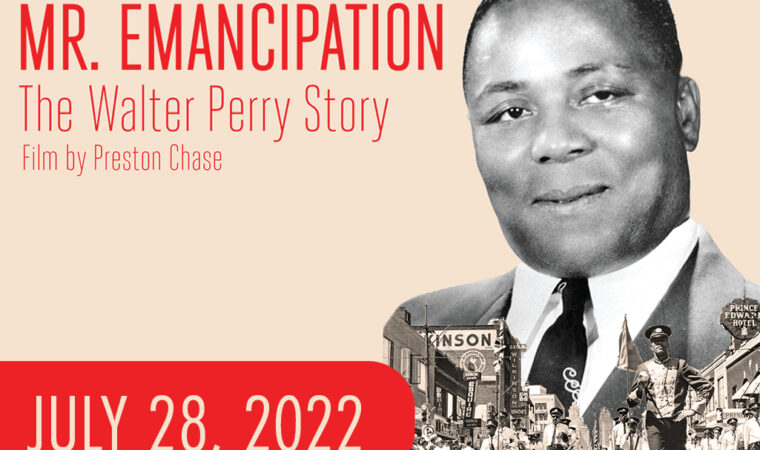 Mr. Emancipation – The story of Walter L Perry’s determination to put on a celebration that would transcend divisions of race and class. Windsor’s biggest annual event for decades. Largest celebration of Emancipation Day in all of Canada.

Mr. Emancipation is the story of Walter L. Perry’s determination to put on a celebration that would transcend divisions of race and class, in spite of racism. He staged an Emancipation Day festival that was where everyone wanted to be like Jesse Owens, Dr. William Borders, Joe Louis, Dr. Martin Luther King Jr, Dr. Benjamin Mays, and Mary McLeod Bethune. Future stars of the Motown sound were witnesses and/or talent show acts, all in the celebration of the abolition of slavery. As civil rights activist Dick Gregory said “The largest Juneteenth celebration was not in America, it was in Windsor, Canada.”  TRAILER: https://vimeo.com/434123147

In March 2021, Canada’s House of Commons voted unanimously to mark August 1st as Emancipation Day. It’s the anniversary of the date Britain’s Parliament abolished slavery in the British Empire in 1834.
However, Emancipation Day has been recognized in Windsor Essex with annual celebrations dating back to late 1800s, beginning in Amherstburg and moving to Windsor. Windsor’s annual Emancipation Day celebrations (the entire August 1st weekend) were, by far, the greatest and largest in Canada, and were organized by Windsor’s own Walter Perry.