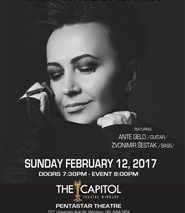 Sarajevo-born AMIRA was in her teens in 1992, when the Bosnian war and its following atrocities broke loose. According to a recent interview she gave the Observer’s Ed Vulliamy, the idea of being a singer was then still unformed in her young mind. Instead, she eagerly rushed to attend the risky, do-it-yourself, literally underground gigs that her husband-to-be Bekim Medunjanin helped organize in city cellars at the time, joining other fascinated, rhythm-hungry young people in sheltering from the violence which gripped their city. AMIRA is largely responsible for the recent popularity of sevdah, which has left Balkan ground and reached more and more European homes, gaining rave reviews from world music magazines and reverberating to spellbound live audiences. From Japan, Taiwan, Stockholm to Liverpool, Istanbul to Helsinki and from boisterous jazz festivals to laid-out-bare solo performances, her vocal charisma unfailingly moves and captivates.

Dubbed “Bosnia’s Billie Holiday” by music journalist and author Garth Cartwright, the comparison reflects the way in which Amira turns sevdah inside out, finding new contexts and forms within a tradition that is hundreds of years old.

What is Sevdalinka?
Much like the Portuguese saudade, or the Spanish duende, sevdah expresses the state of a mournful, melancholy heart, a yearning and a hymn to a love that pains you even at its most euphoric moments. In a collective global narrative soulfully built and popularized by Cesaria Evora’s Capoverdean morna, Amalia Rodriguez’s Portuguese Fado, Edith Piaf’s lamenting French chanson and, more notably, Billie Holiday’s legendary angst-ridden jazz standards, Amira Medunjanin embodies the heart and soul of traditional Balkan sevdahlinka.