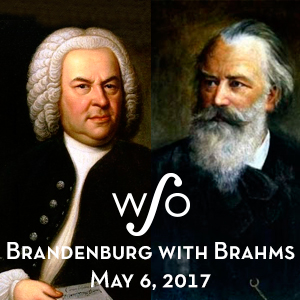 Bach’s Brandenburg Concertos no. 1 and no. 3 are presented on the first half of this concert. The six Brandenburg Concertos are among the most cherished set of orchestral works and are a cornerstone of Baroque music. This is the second of three concerts that are a part of the WSO’s presentation of all six works, which began last October and will conclude next October.

Healey Willan’s melodic Poem for Strings is included on the program. The Canadian Music Centre notes that Willan is frequently referred to as the “Dean of Canadian Composers.” The Poem for Strings was originally written in 1904 for string quartet and later expanded for string orchestra.

The big, bold, and intense—Symphony no. 4 by Brahms concludes the final Masterworks concert of the season. The WSO will expand the size of the orchestra to 57 musicians for Brahms’ magnum opus.

Maestro Franz will host a pre-concert talk at the theatre one hour prior to the start of the concert. The talks are free for concertgoers and provide background and insight for audience members.